The superficial reason why I’m doing this is very simple: to try and look more like Gal Gadot, whom I have a massive girl crush on since seeing her in Wonder Woman. It’s also entirely zero waste since I’m basically drinking water from the sink and from the filtered water system in the office. I also want to see if I can feel energised and reduce snacking during the day without the addition of caffeine (which I usually drink in the form of black tea, which produces a baggie and tag of waste).

I started off really having to be super mindful of whether I’d drunk anything in the last hour or so. I decided I had to measure my progress so I entered the amounts in my Fitbit app, as closely as I could remember them.

You’ll notice that while I drank a lot of water there were some days when I just really couldn’t meet the goal, usually over the weekends because refilling and refilling wasn’t all that fun. Also I was marathoning Goblin and I didn’t move much.

I realised that my skin became pretty soft and the usual bumps that I feel on the surface have mostly disappeared. My hands, which usually become very dry under the office aircon, seem to be a tad more moisturised. Other benefits is that I walk at least 250 steps every hour because I have to pee so much.

On the negative side, my face seems to be like a magnet for mosquitoes. I have a few bites all over my face. 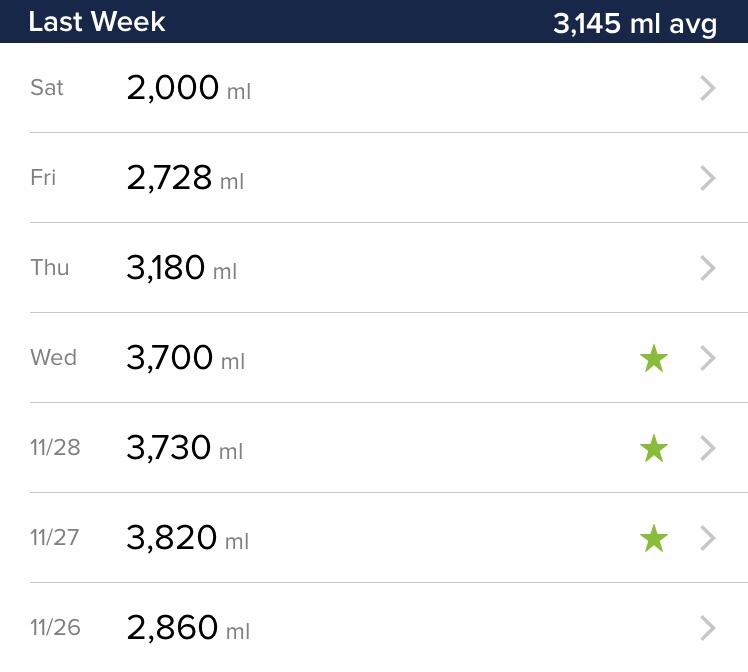 Not much to report, still getting bites on face. Moisturiser goes on easier, so I use less of it. I think my eye bags (usually hidden under spectacles anyway) are improving, and the green veins are less visible…maybe. Still making numerous trips to the toilet. I feel less hungry in general but I still have to eat quite a bit during meal times (and I would totally still snack if I had snacks) so maybe it doesn’t reduce hunger pangs all that much.

Haven’t had as much constipation as I’ve been having previously (took carbon pills when I was too regular and then it caused constipation).

I eventually minimised my liquid intake over Friday, Saturday and Sunday as I wanted to see if it was the water that was making me feel nauseous. It wasn’t, and I had harboured the idea I might have been pregnant for a while (since my period was eight days late), but my period arrived unceremoniously on Sunday instead.

Also had a bad headache so I drank my first can of Coke in a very long time. It didn’t really help much.

Fell off the wagon in a big way, not meeting my target at all…. the reason for this is I’ve still been having nausea and I couldn’t bring myself to drink more water. All this was practically forced down my throat, and it was such a struggle to eat or drink. Had little to no appetite this week either. Went to see a doctor on Wednesday for the nausea and he did give me meds, but sometimes it didn’t really work either. The nausea subsided on Saturday, but came back on Sunday… so…

Finally went to another doctor for a checkup. Should probably have checked myself into an A&E but my husband advised me to go to a clinic instead. So I did, and $91 later, she diagnosed me with possible acid reflux and I’m now on medication and a bland diet… so technically I am getting more fluids through soups and porridge, but I don’t note these down unless it’s actual water o consume. I have cut off tea from my life for these few days anyway, which makes me obviously more sleepy after lunch. Still not meeting my water goals.

A gallon of water was always going to be particularly ambitious, probably more achievable if I was regularly working out, which I’m not because I’m unmotivated at this point of time. I did do a seven minute workout yesterday so maybe that’s the start of something. I’ll continue to log my water intake and try to get 3 litres in daily.